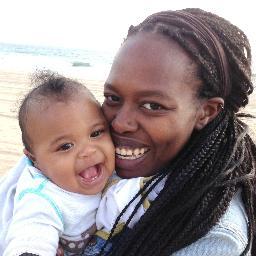 Hope Wabuke is a California-based mom and writer. Her poetry has appeared in The North American Review, Ruminate Magazine, Salamander, Fjords Literary Journal, Literary Mama, Joint Literary, Kalyani Magazine, Weave Magazine, Cease Cows, and other publications. Her essays have appeared in Salon, Gawker, The Daily Beast, Los Angeles Magazine, The Feminist Wire, The Hairpin, Ozy, The Root, The Los Angeles Review of Books, and Ms. Magazine online. She reviews books for The Kirkus Reviews and has won fellowships from The New York Times and the Barbara Deming Memorial Fund for Women Writers.
Website ♥ Twitter

your little head bobbing away from me

your bones shaped like mine
made inside my body
made strong from my milk, my body.

I remember the first time he kicked you.

when you are not here I can feel you crying
my breasts swelling full of the milk you yearn for
I know when you are falling asleep
and waking, when you are hungry again

calling mommy mommy
in your frightened looking around
wondering why I am not there.

I am not allowed to protect you from this.

When my son was born two years ago, I was prepared for how much I would love him, but not for how afraid I would be for his safety. When I was pregnant, I had felt a deep, intense connection to my mother and grandmother, thinking about our relationship and even some memories of my mother’s that I could not possibly have known. But after my son’s birth, I saw my parents and their choices in a whole new light; I understood that they had done the best they knew at the time—that they, too, had only wanted the best for their children—however much I may have disagreed with their choices at the time.

I began to think, too, about my childhood faith and why I left it, primarily because of the violent, hateful acts that have been done—and still are done—in its name. I realized that my spirituality was about my relationship with God, not about what anyone else had done or was doing in God’s name. My spirituality has been deepened and strengthened by needing to believe there is a force outside of me and bigger than me that is at work protecting my baby. Because the world is not a very safe place for children—with the social acceptance of violence against children, the proliferation of gun violence, and the trivialization of domestic violence just to name a few. And, with the rash of violence towards young black children—the latest tragedy being the murder of twelve-year-old Tamir Rice by police in Cleveland, Ohio—the safety of African American children becomes even more pressing. My work primarily revolves around the issues of social justice relating to the welfare and rights of children, women, and minorities. In addition, I believe that by writing about the loving spirit of motherhood and my own healing from domestic violence, I can also work to effect social change and healing—to do a little in helping make the earth a kinder, safer place.

The poems here are sprung from this thinking work. They are from The Body Family, my poetry collection-in-progress, which explores my family’s escape from Idi Amin’s Ugandan genocide and the aftermath of healing in America. In it, I reclaim my womanhood, culture, and spirituality from a legacy of violence.