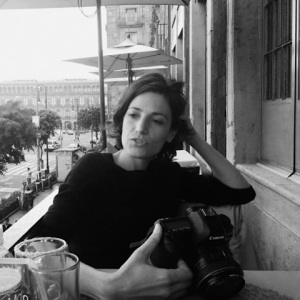 Kate Joyce is a visual artist based in Chicago, Illinois. Born and raised in Santa Fe, New Mexico, she has exhibited nationally and internationally with photographs covering a diverse array of subjects. Throughout her developing career, she has valued her collaborations with writers, artists, designers, and community builders. She studied photojournalism and sociology at San Francisco State University; Spanish in Guatemala and Chile; and documentary photography at the Center for Documentary Studies at Duke University. She received a Lewis Hine Documentary Initiative Fellowship in 2004 and has had work published in The New Yorker, Manoa Journal, Harper’s Magazine, The Paris Review, and Architect Magazine. Her work is held in the collections of The Museum of New Mexico, The J.P. Morgan Chase Art Collection, and Duke University Perkins Library Special Collections and Rare Archive. She is represented by Rick Wester Fine Art, New York.
Website ♥ Twitter ♥ Facebook

One afternoon I was returning home from work. My neighbors were hanging out on the sidewalk in front of their house, as usual. That day, though, they were also accompanied by a large yellow snake. I walked over with my camera. They introduced me to their friend Omar (not pictured) and his albino python. The python is a female, I was told. You can tell by the tapper of her tail. I made many photographs of the snake and the people around her that afternoon—curious families walking by with their young children, a police officer who stopped to take his own picture of the python, Omar with the python wrapped around his bulky shoulders, the snake stretched out on the sidewalk with the neighborhood bar in the background—but it wasn’t until days later, when I was editing the photographs, that I found one image I was truly interested in. A young boy reclining on the cement steps in front of two doors, wearing a T-shirt with the Transformers logo emblazoned in military camouflage and hot-rod flames rising from the soles of his Converse high-tops—cultural symbols of masculinity—all the while wreathed by the female snake. I’m drawn to the boy’s curiosity and calm, his ease and gentleness. In this image I see an implied union and compassion between the snake and the young boy, between man and animal, that transcends the spectacle and obscenity of a python brought out onto the streets of Chicago. In all of my work, I am often focusing on and in some way hoping to express moments of grace, awkward beauty, sensuality, transformation, and solitude.