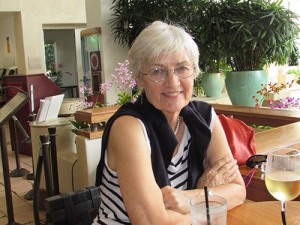 Phyllis Gray Young is a retired nurse. She lives and writes in Honolulu, Hawai‘i. “Joaquim” is an excerpt from her novel Sea Home.

On clear days, golden light shines across the Atlantic Ocean onto Pico Island. The light bathes the red roofs of the village houses, the rocky black coast, and the dark flanks of the volcano for which the island is named. At the village of Lajes do Pico, the volcano rises so sharply that people must crane their necks to see the bare summit and its thin stream of smoke spiraling into deep-blue sky. Lower, on the mountain’s wide middle slopes, green pastures and fern-laced laurel forests spread over the cloud zone. Below that, terraced fields of grapes, potatoes, and maize descend seaward to dense patches of blackberry bramble and the cave-riddled shore.

At day’s end, village church bells ring out and farmers put down their shovels and rakes. As they have done for four hundred years, the farmers say a prayer to the Virgin Mary before leaving the fields. The custom continues in the time shortly after the end of the Second World War. On the surface, the lives of the villagers appear untouched by people and events beyond the Azores. Often as the farmers walk home, an açor can be seen flying along the coast, hunting rabbits, rock pigeons, or dog pups. The hawk is a presence that unsettles. It is older than the farmers’ ways and is a herald of death, reminding them of an ancient force at work throughout the natural world. This force triggers change and, without regard for custom, transforms lives. Old forms must be discarded, but what will take their place?

On a late afternoon in June, a young man named Joaquim sits in the open doorway of his family’s cottage atop a small rise near the east edge of the village. There he lives with his grandfather, Lucas; his sister, Fátima; and Fátima’s baby girl, his godchild. On that afternoon, as on many, he props his lame right leg on the step and holds a telescope to his right eye. His father, a whaler who drowned at sea when Joaquim was a young boy, gave him the instrument. Through the telescope lens looms the west end of the village: its small harbor, salt-water tidal flat, and headland. Gulls and terns careen over the ocean, and an açor flies over rush and grass on the tidal flat.

I wrote “Joaquim” one summer. It is the third of three linked sea tales that interweave the main narrative of my novel Sea Home. Two years before, I had gone on a research expedition to Italy, Cornwall, and the Azorean Islands with my husband, a biologist who studies squid. On coming home to Honolulu, I attended the University of Hawai‘i and studied English literature and creative writing. I wrote a nonfiction account of the research trip for a class in memoir, and my teacher suggested I turn it into fiction. At the time, I was taking a course in Old English where we read poems like “The Seafarer,” “Deor,” and “The Wife’s Lament” in the original language, and I was reading, at my husband’s suggestion, The Kingdom of the Octopus by Frank Lane. With these works swirling in my mind, I somehow got the idea to write a story-within-a-story for my novel and to shape the main narrative around it—a method that gave me so much trouble I’d hesitate to recommend it to anyone. So, the sea tales came about, in relatively good time and in the basic form they have kept, though naturally with revisions. The writing of the main story in which to embed them took very much longer.

Like the other two tales, “Joaquim” has a man as the protagonist. This is not something I thought much about when writing the tales. The characters simply appeared to me as distinct persons. But traditional sea stories rarely have women protagonists, and most early chroniclers of squids and other sea creatures are men, so perhaps my subconscious took note of that.