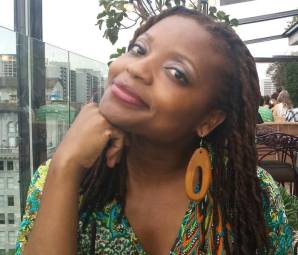 Cassandra Lane is a former newspaper reporter and high school literature and journalism teacher who has published essays, columns and articles in a variety of newspapers, magazines, and anthologies. She is an alum of Voices of Our Nation Arts (VONA) Foundation and A Room of Her Own (AROHO). She received an MFA in creative writing from Antioch University. A Louisiana native, she lives with her family in Los Angeles and is the managing editor of L.A. Parent magazine.

From “Day of Venus”

After turning from my Christian upbringing in junior high school, I spent whole days that evolved into years pursuing one thread after another to find myself, to understand others. Astrology and numerology. Name analyses and personality profile systems. Chakra and pendulum readings.

My friends sat under my investigations for the readings of astrological charts. A Taurus sun with Libra rising, I told them I was ruled by Venus, and this vision permeated my approach to chart readings. Two people I had a sudden flash to put together ended up getting married, which sent swarms of folks flocking to me like moths, clutching their birth details and desires. I obsessed over the symbols, dissecting and synthesizing angles and degrees and images, uncovering problems and predicting destinies.

“You take this symbolism thing way too far,” my friend Nelson, a poet, said fourteen years ago in New Orleans. “Everything is not a sign, Sand.”

Yet in all my searching and acquiring, I became more lost than ever. Doomed to remain the nearsighted girl roaming frantically down a maze of hallways at her new high school, too vain to don her eyeglasses, too proud, too scared, to ask for help. Instead, she pretends she is just headed to her locker whenever someone passes, or going to the girl’s bathroom there, just beyond their shoulders. Each door she tries is locked or ends up being the janitor’s broom closet, and so she turns again, choking back panic.

From the Contributor Commentary

“Day of Venus” is part of a larger work entitled “Bound: Romance, Race & Redemption.” This larger project began more than a decade ago as one little essay after another. I clung to the root meaning of the word essay—“to test”—as I explored connections between present day and the past.

“Bound” follows the main narrator’s quest for marital bliss and her obsession with the 1904 lynching of her paternal great-grandfather, Burt Bridges. The lynching was an act of domestic terrorism that tore apart a marriage and family and resulted in generational repercussions. Told through the voices of Sand and her maternal grandmother, Avis, the story questions the lines between ancestral bondage and personal responsibility. This manuscript of sixty-five thousand words starts in Louisiana, transports the imagination to 1904 Mississippi, and ends in present-day California.