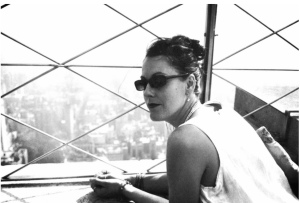 Jeannine Ouellette has authored several nonfiction books and the children’s picture book Mama Moon. “Family, Family” first appeared as second-place winner in the 2016 Masters Review Fall Fiction Contest. Her work has also been recognized in the Iowa Review Awards, Bellingham Review’s Annie Dillard Award, Cutthroat’s Barry Lopez Creative Nonfiction Award, Narrative Story Contest, december magazine’s Curt Johnson Prose Awards, and Proximity’s Essay Contest, among others, and her essays and stories have appeared or are forthcoming in North American Review, Utne, Penn Review, Cleaver, The Doctor T.J. Eckleburg Review, and Nowhere, as well as several anthologies. She has received two Pushcart Prize nominations and support from the Millay Colony for the Arts, Brush Creek Foundation for the Arts, and Tin House Writers Workshop. She teaches writing through the Minnesota Prison Writing Workshop, mentors through the Association of Writers and Writing Programs, and is the founder of Elephant Rock, a creative writing program based in Minneapolis. She recently completed her first novel.

The thing about Leo Whittaker is that although he was not liked, he was not unlikable, as some children certainly are. Grown-ups, especially teachers, won’t always acknowledge this, and I don’t particularly care to acknowledge it myself, truth be told. But it’s a fact—some children are simply foul. Not Leo, though. Not at all. Leo was just a bird-boned slip of a boy with blue veins pressing through his clear skin like a curvilinear map of rivers. He was a placid child who committed none of the usual offenses that tend to mark first-graders. He neither picked his nose nor pushed and shoved the girls nor licked the bottom of his shoes nor tugged at his penis absentmindedly throughout the school day. And even for a first-grade boy, Leo wasn’t the slightest bit dirty or smelly—although, to be fair, none of our students at Rolling Meadow Waldorf School were dirty or smelly. They were too well-heeled for that. Some of our families did reject chemical deodorants—so inevitably those children would ripen by sixth or seventh grade. But I digress.

If anything, I found Leo more charming and likable than most seven-year-olds, what with that sweet, clear diction of his, those dark raisin eyes, that uniform of green corduroy pants (green “for grass” and corduroy “for the extra nice feeling of it”) and bright argyle sweaters. I admired his tidy lunches of almond butter on sourdough, dehydrated pineapple wrapped in waxed paper, and glass jars of sauerkraut (homemade—his mother also fermented her own sourdough starter, yogurt, and kombucha). Speaking of fermentation, Leo shared his mother’s knowledge of the art and science of it, on which he sometimes expounded. “In Latin, ferment means to leaven,” he told me early on that September. “That word is old-fashioned,” he explained. “It means to wake up. Or turn something into something else.”

When I was in second grade, I lived in Douglas, Wyoming, with my mother, stepfather, and two sisters. At the time, we attended a Lutheran church, because my mother had been excommunicated from Catholicism as a result of divorcing my father. This was the early 1970s. We eventually stopped attending church altogether, but for that year in Douglas, we were Lutheran, and over Christmas, my Sunday School class held a gift drive for orphans abroad. I don’t remember where abroad, just abroad. I do remember deliberating long and hard about what I should bring to that gift drive.

On the one hand, I wanted to give something wonderful, something an orphan would really love. In other words, something I really loved. On the other hand, my family was chronically broke and we didn’t have much ourselves, so it was hard to let go of something I genuinely cared about— like, say, the little box of costume jewelry I had dearly wished for, bravely asked for, and, to my utter surprise, received as my absolute best Christmas gift that year. I had no idea the jewelry was essentially worthless. To me, it was glorious. So, to give the shiny drugstore ring and bracelet, or to keep them? This was the question, and I struggled long and hard before accepting that I had no choice. After all, this was church. God was watching.